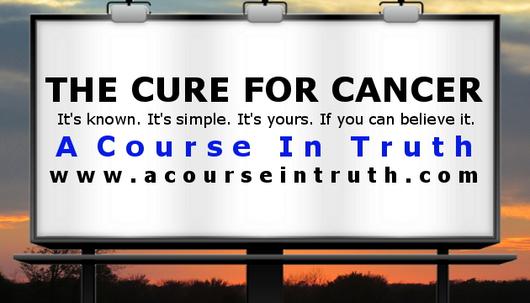 A Course in Truth

Truth is the Best Medicine

But Laughter is Next-Best

Our senses are extremely limited. For example, there are more things that our eyes cannot see than things they can. And consciousness itself is very limited, as it is unaware of more things at any given moment than it is aware of...

So, it should come as no surprise that we find ourselves believing many things that simply are not true. And fear often causes us to hold tight to those beliefs, in a poorly-conceived effort to obtain a (false) sense of security.

Only Truth offers real security. And all we have to do is be fearless enough to keep the doors of our minds open to It.

A Moment of Levity

"That's ridiculous," the science-minded man said. "A day as we know it didn't even exist until the solar system existed. So, what were those first 'days' of creation measured by, before the solar system was created? And as far as the age of the earth, how do you account for ancient dinosaur fossils? The Bible doesn't mention dinosaurs."

The religious-minded man ignored the first part of that question when he replied, "God put those dinosaur bones there in order to test our faith in His Word."

The science-minded man laughed and said, "We really do find reason to believe whatever we want to believe, don't we? I suppose you also believe in miracles."

The religious-minded man asked, "OK, if you don't believe in an intelligent Creator, how do you account for the existence of this world and intelligent life?"

"Absolutely nothing existed until the Big Bang, billions of years ago, when matter came into being," the science-minded man replied. "And then, over time, matter got more and more complex by various processes, including those involved in the life-cycle of a star. Atoms eventually formed living cells through chemistry, intelligence appeared, and intelligence evolved into higher and higher forms through natural selection."

The religious-minded man responded, "And you say that you don't believe in miracles? Matter came from nothing, life was caused by non-living matter, and intelligence is an effect of non-intelligence? OK, you've convinced me of one thing; we do indeed believe whatever we want to believe!"

Believe It Or Not

​And now, believe it or not, we are going to find that we've been given the answer to the greatest secret in this entire Universe. No kidding. Are you ready for it? On the next page: The Meaning of Life.